We are almost half way through the year now, where did that go? Winter seems a distant memory but some things are still showing signs of the damage the cold winds caused, none more so than climbers who were cut back by the cold and are now just starting to come into their own.

This month I have decided to concentrate on these lovely plants as often people forget they can grow climbers almost anywhere in the garden. Perhaps this is up an existing building, tree or large shrub, along wires or up the more traditional trellis. There are so many to choose from but here are a few of my favourites for June.

One of the many plants that has been bred by Raymond Everson, this plant is ideal for growing in containers or along walls and fences. It likes to have its roots in the shade like all Clematis and its flowers in the light. Being a lovely pink with a darker bar the flower lends itself to being planted in many different spots be it east or west facing.

I find that C. ‘Abelene’ will ‘wash out’ if in too much sun and that it performs really well in a north facing spot. It stays pretty perfect on that aspect in fact.

Other good Clematis for a north wall would include Hyde Hall (white), Ice Blue (pale blue/white) and ‘Samaritan Joe’ (white with a purple edge). 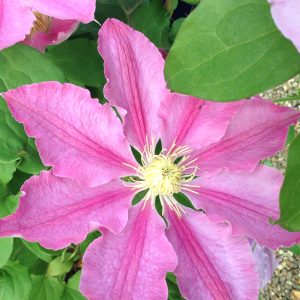 From the same breeder as C. ‘Abelene’ and a great choice for a container as it only gets to about 1.2m (4ft) tall and flowers for ages!

I have been lucky enough to get a second flush of flowers from my one by cutting it back once the first flush has faded. It then produces new growth and flowers later in the year.

Growing Tip – Make sure it is well fed after cutting back and that will encourage those later flowers.

It seems to tolerate all aspects but does well in my west facing position. Other good forms that do well with more sun would be C.  ‘Rebecca’ (red), ‘Fleuri’ (deep purple) and ‘Sacha’ (deep blue). 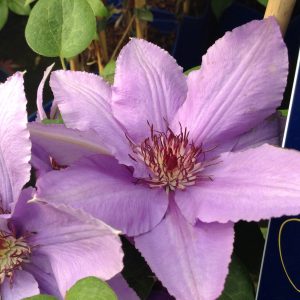 Yet another Clematis hybrid from Raymond Everson, C. ‘Josephine’ has large flowers with a huge central cluster of smaller petals which often continue to open even when the main petals have fallen.

There are several double forms and all can be grown in full sun or semi-shade in containers or directly in the ground. They range in heights from 1.8m – 3m (6-10ft). The doubles will often flower again later in the year if correctly pruned but because the plant has put so much energy into the flowers the second flush are usually single, which I prefer! 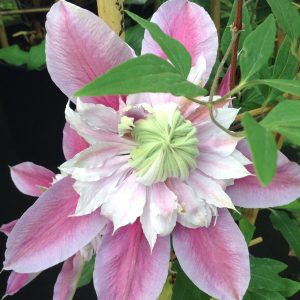 If you like scent in the garden then a honeysuckle is a must.

One of the best is this relatively new variety which produces white flowers which fade to a lovely cream as they age. It is highly fragrant and quite vigorous. It gets to 3-4.5m (10-15ft) but can be kept smaller if need be.

Like all honeysuckles it prefers semi-shade and some moisture. The worst place for one of these is south facing as I find it is too dry in this part of the world, which causes them to become stiff and slow in growth, they often get mildew when they are too dry. If in a cooler spot I find that they grow stronger and the perfume stays for longer in the day. 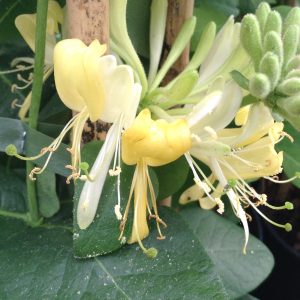 June is a good time for roses in the garden, this year they are a little late due to the cold winter but I have noticed that they are covered in flower buds so I think it’s going to be a bumper year for flowers.

This plant is a rambler but, unlike most ramblers, it will flower on and off throughout the summer.

The flowers are double with a light traditional rose scent, they have a hint of lemon in the centre of each flower with the outer petals fading to white. It reminds me of large scoops of vanilla ice cream!

I grow mine on chains which are secured to posts so that it forms a swag and they are covered each year in hundreds of flowers. Simply gorgeous. I replace one or two of the main stems each year and prune any side growth form the main stems back to two or three buds in early spring which encourages masses of flowers, it’s such a simple way to grow them with stunning results. 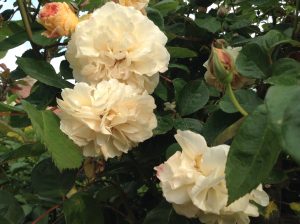 If flowers are not your thing then how about this handsome climber which likes a sheltered site out of the wind. West facing would be ideal but as long as it’s sheltered you can grow it almost anywhere.

The leaves start off green but some will gradually colour at the tips with a whitish pink tinge giving it one of its common names ‘The cats tongue in the milk plant’.

It does produce small pink flowers in summer which are pendulous and hide away in the foliage. It will tolerate most soils as long as they are moisture retentive and well drained. It is quite vigorous and can get up to 4.5m (15ft) tall. 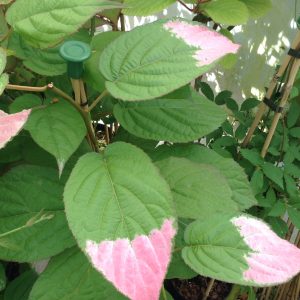 A great climber for a semi-shady spot that produces lovely multi-coloured foliage. It produces flowers but they are small and insignificant. The new growth is tinged with a beautiful champagne pink which gradually fades to white as the leaves age. These variegated leaves can get damaged if in full sun.

It works well at the back of a border where it can enhance other foliage textures and shapes, or grow it through evergreen shrubs such as conifers or Pittosporums to create good foliage contrasts. It is relatively slow to get established but once it does you can get up to 1.2m (4ft) of growth each year as long as it has good fertile, humus rich soil. 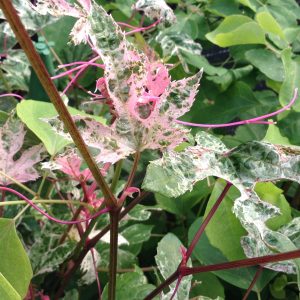 Hanging Baskets – Now the risk of frosts have finished you can safely put out your hanging baskets and plant up your tubs for summer colour. Water first thing in the morning or last thing in the evening so that the soil remains damp during the heat of the day, but never water during the heat of the day as this can increase the risk of damage to flowers and leaves. Dead head regularly to keep the plants flowering and feed often as there are a lot of plants in a small area competing for nutrients and water, as this stops them getting hungry and sick looking.

Old Seeds – If you wonder what to do with old seeds left over from last year or the year before don’t just throw them away. What I do is gather together what are out of date and then sift through them. Things such as Parsnips, Cucumbers, Courgette and Tomato seeds I simply throw out as often these do not have good germination when old. Old flower seeds I stick together in one large container (Margarine tub), taking them out of the packet and mixing them together, this I then liberally sprinkle in empty patches in the garden and then I wait and see what germinates. You can get some amazing combinations as it is surprising what is still viable, as long as you remember where you sowed them and don’t weed them out!

For old veg seeds such as Lettuce, Beetroot, Chard, Rocket, herbs, Peas, Mustard and Cress I do the same as above, mix them together in a tub and then sow them into a half or full seed tray. Cover them up as normal and then when they have germinated and grown to about 2-3 inches in height I cut the tops off with a pair of sharp scissors and use the tops as salad in sandwiches etc .You can create your own flavour mixes and get some great gourmet sarnies without having to buy this kind of thing from the supermarket. All its cost you is a little time and some compost. When all is cut back you can compost the roots and start again with more left over seeds. Sometimes if you are careful where you cut them they will re-grow for another crop of leaves! Have a go, it’s fun tasting your experiments!!

Friday 25th September 2020
10am – 12.30 Another annual event, slightly different this year, we plan to have a number of tables well-spaced throughout the nursery, cafe, gazebos and our own “Hot tunnel”. Either reserve a […]... Read more